“The original idea was to mimic the Hare and Hounds or Fox and Hounds style chases that have been around for centuries in one form or another. Some “gentlemen” substituted men for the hounds in an effort to add something different to the sport. These sportsmen became known as “hashers” because the hash house, or dining hall, was their meeting place. The sport was referred to as "Hounds and Hares" or the "paper phase."

The Hash House Harriers had its humble beginnings in 1938 with an Englishman named Albert Stephen Ignatius Gispert, in what is now Malaysia. Having a fondness for the “paper chase,” he gathered together a group of expatriates to form a group in Kuala Lumpur that would later become a worldwide legacy. The fraternity received its name from the Selangor Club Chambers, which due to its lackluster food was commonly referred to as the “Hash House.” 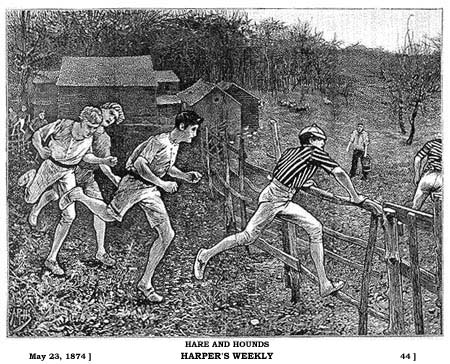 The Objectives of Hashing:
(from a 1950 Kuala Lumpur club registration card)

Hashing died out during World War II but picked up in the post-war years, spreading through Asia, Australia, and New Zealand . . . then exploding in popularity in the mid-70s throughout the world. Today there are thousands of Hash House Harrier clubs in all parts of the world, with newsletters, directories, and even regional and world hashing conventions.

Today we are known as ” A Drinking Club with a Running Problem.” You don’t have to be a drinker or runner, BUT you MUST have a good sense of humor and a dirty pair of running/walking shoes. ”

Some of the above info was posted on GoToTheHash.net from an old article in a Malaysian Airline Magazine.